Security cameras are an essential aspect of keeping your home and business protected. Cameras make most would-be robbers flee once they are spotted, even if the camera is just a decoy set up to scare intruders. If you are worried about security and are planning to beef up your security, you have probably stumbled upon the two most common types of security cameras – analog and digital, but what do these terms mean, and more importantly, what are the differences between them?

The primary difference between analog and digital cameras is that analog cameras record data in an analog format which is then uploaded to a physical piece of hardware or a DVR, whereas digital footage is uploaded to a network or cloud via the internet.

There are many other differences between digital and analog security cameras which this article will cover in a lot more detail. For example, analog and digital equipment are separated not only in terms of the type of connectivity and storage but their price as well. Read on to learn about analog and digital security cameras, including the installation and management of the equipment as well as a brief tutorial on figuring out the right type for your needs.

Analog security cameras were first invented in the 1920s and have had many years of incremental improvements in their technology. They have been colloquially referred to as closed-circuit television cameras or CCTV cameras for years. CCTV is now often used to refer to both analog and digital security cameras, which may cause some misunderstandings even though there are many differences.

On the other hand, analog security cameras use old-style coaxial cables to provide their footage back to a physical, digital video recorder (DVR) with hard disk storage. The DVR converts the analog signal to a digital one before recording it. Some DVRs, in turn, can make the footage accessible online or upload it to the cloud. However, some are not internet-capable. The table below provides an in-depth comparison of many specifications, with the main ones explained in more detail later in this article.

The Real Cost of Analog and Digital Security Cameras 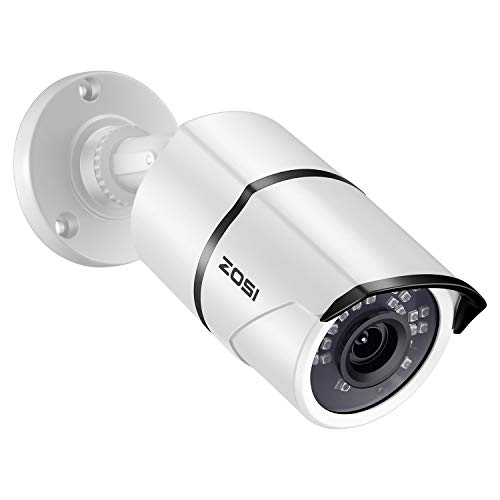 Analog and digital security cameras have very different costs associated with them. On a camera-to-camera cost comparison, typically, you can find analog cameras at a lower price than their digital counterparts, like the ZOSI 2.0MP HD 1080p 1920TVL Security Camera (on Amazon). Compared to digital, like the Reolink 5MP PoE Camera (on Amazon), you can pay nearly two times more per camera. However, camera cost is not the only cost factor in your security system.

The additional expenses include things like labor for installation and setup, cabling (power, coaxial, and ethernet cables), DVRs (needed for analog, not required for digital), and monitors/TV (needed for analog, not needed for digital). Since many digital security cameras work with power over Ethernet (PoE), they only require one cable for installation. Analog security cameras need two cables, the coaxial cable, and the separate power cable.

Additionally, analog cameras – whether bulleted or dome (our guide on the differences) – require a DVR system and a monitor to record their feed, which is generally a hefty upfront cost. Depending on the number of cameras you are installing and the distance you would have to run cabling to cameras, you might find that a digital security camera system costs less than an analog security camera system.

Although there are “HD” analog security cameras on the market, they will never achieve the quality levels of their digital counterparts. There is one specific reason for the quality limitation, and that is due to the method of data transmission. Analog data transmission rates are at their glass ceiling, and data cannot be transmitted any faster than what already is possible on coaxial cables. Coaxial cables are also susceptible to signal degradation; quality may be further impacted at further distances (from the camera to DVR).

Ethernet cables, on the other hand, can transmit much more data than coaxial cables. Faster and more data transmission means higher quality images can be easily transferred and from far distances too. Therefore, digital security cameras are built to capture images at much higher quality since they can transmit more video information. It is possible to get quality recordings from analog cameras that are decent enough to make out most details. However, if you want to ensure that you can clearly see all the finer details, such as people’s faces, license plate numbers, etc., digital security cameras are the safer bet.

Is a DVR Needed for Analog and Digital Security Cameras?

How to Pick Between Digital and Analog Security Cameras

The choice between analog and digital security cameras is a difficult one. To make the right decision for you, you should consider criteria like your budget, the number of cameras you would need (and if this number would change for analog and digital, whether you want or need a DVR, as well as the preferred image quality. Since the cost of digital and analog security cameras varies widely, with analog cheaper on average – you may opt for the latter.

However, suppose you weigh all the costs, i.e., cameras, additional components (wires, DVR), and installation. In this case, you might find that a digital security system is cheaper than an analog one or incrementally more. If image quality is the most critical aspect of your security system, you should choose that digital option. With digital security cameras, you will also be future-proofing your system as well. In 5-10 years from now, you can easily upgrade your cameras to newer, PoE-based ones with even better quality and capabilities.

Digital and analog security cameras have differences, including cost, image quality, installation cost/time, and maximum coverage area. To get the right security camera system for your home or business, you should always prioritize what is most important to you. If lower overall cost is more important, go with the cheaper option after making a detailed comparison. If the most outstanding image quality is what you are striving for, go the digital route.